This is a website about the artist Albrecht Durer. 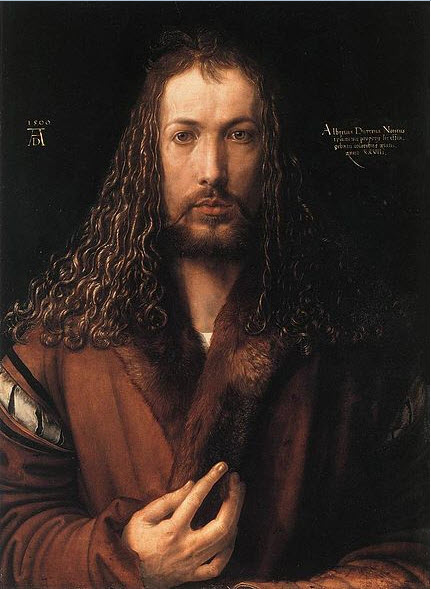 The Life and Art of Albrecht Durer

Albert Durer, the most celebrated artist of Germany, was born at Nuremberg, 21st May 1471. His father was a goldsmith, and he carefully trained his son, and instructed him in his own craft. But the youth showed greater inclination for painting, and in very early years had already attained considerable artistic skill, as is proved by such drawings as the portrait of himself at the age of thirteen, now in the Albertina Collection, Vienna. He was accordingly apprenticed to Michael Wolgemut, the best painter in the town at the time, and the chief illustrator of the famous Nuremberg Chronicle.

After serving his time under this master, Michael Wolgemut, Durer started on his travels in 1490; and there is reason to believe that he found his way to Italy and visited Venice. On his return his father arranged a marriage for him with Agnes Frey, the daughter of a Nuremberg merchant. It has been constantly asserted that the union was an unhappy one, but Thausing, Durer's most accurate biographer, has shown reason for believing that the letter of Pirkheimer, written two years after the painter's death, upon which this statement is founded, should be received with great caution. Durer now established himself in his native town; and, largely aided by such assistants as Hans Leonhard Schaufelein, Hans Baldung, and Hans von Kulmbach, he executed many paintings, among which the triptych in the Royal Gallery, Dresden, and the fine Paumgartner altarpiece in the Pinakothek, Munich, may be named. 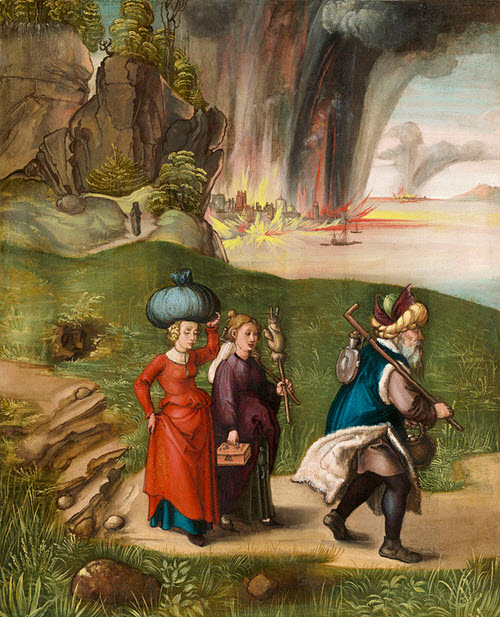 In 1498 he published his first great series of designs on wood, the illustrations of the Apocalypse, which, it seems to be now generally admitted, were, like the rest of Durer's work of the kind, cut upon the block by a professional engraver. The copper-plates of this period include The Prodigal Son assigned to 1500; the Shield of the Death's Head (1503); the Shield with the Lion and Cock, assigned to the same year, and in technique one of his most accomplished engravings; and the Adam and Eve (1504). In 1504 he completed his Adoration of the Kings, begun in tempera and finished in oils, now in Florence; and the elaborate copper-plate of St Eustachius probably dates from the same time.

In 1505 Durer visited Venice, with the view of arresting the piracy of his works by Marc Antonio, who had copied, line for line upon copper, certain of his woodcuts of the Life of the Virgin, which had been executed previous to this date, though the completed work was not issued till 1511. Here he produced the Feast of the Rose-garlands, now in the monastery of Stradow, near Prague, of which he wrote: "I have also silenced the painters, who said I was a good engraver, but did not know how to manage colors. . . . There is not a better picture of the Virgin in the land." On his return he painted Adam and Eve (1507), now in the Pitti Museum. in Florence; and his Assumption of the Virgin, a work executed with unusual care and elaboration, as is indicated by the painter's correspondence, and proved by the very numerous studies for its various parts which still exist. The central portion of this altar-piece, executed entirely by his own hand, was destroyed by fire in 1674. It was followed in l511 by the All Saints' picture, styled The Adoration of the Trinity, in the Imperial Gallery, Vienna.

Durer was much employed by the Emperor Maximilian I., of whom he executed several portraits, for whose prayer-book he designed a famous senes of decorations, and in whose honor he drew the Triumphal Car and the Triumphal Arch which were engraved on wood, the latter on ninety-two blocks, which when united form a surface 11 feet 3 inches by 10 feet wide -- the largest known woodcut. 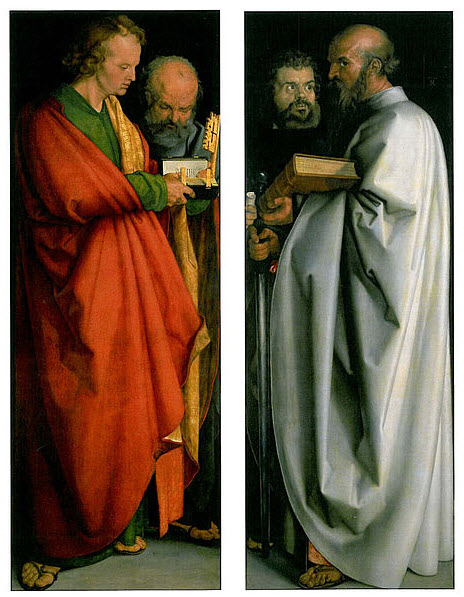 It was after the death of the emperor, and in order to recover sums due for his commissions, that the painter visited the Netherlands in 1520. His curious journal of the expedition has been preserved and published. At Antwerp Durer made the acquaintance of Erasmus, whose portrait he drew, and afterwards engraved on copper, and he was present at the coronation of Charles V., who appointed him his court-painter; but among the swamps of Zealand he seems to have contracted a kind of low fever, and his health gradually failed, till he died at Nuremberg, 6th April 1528. During his later years the earnest and reverent-minded painter manifested great sympathy with the doctrines and progress of the Reformation; his journal in the Netherlands contains an impassioned outburst of grief, occasioned by the supposed death of Luther ; and in 1526 he presented to the council of his native town a pair of companion panels, representing St John with St Peter, and St Paul with St Mark, inscribed with warning texts from Luther's translation of the Epistles.

Durer ranks as the greatest of German artists of the Renaissance; and his work is thoroughly national in character, fully expressive of all the homeliness and all the mysticism of German culture during that epoch. His paintings are distinguished by effective composition, careful manipulation, and forcible coloring; and that searching grasp of character and expression which renders his work in portraiture so valuable gives a sense of truth and reality to his subject-pictures also. His Four Apostles, above referred to, and now at Munich, are interesting as exhibiting the final development of his pictorial style, being far broader in handling and larger in the disposition of the draperies than his earlier works. His masterly drawings and studies are very numerous, and are to be found in most public collections, those of the Albertina, in Vienna, and of the British Museum, London, being the richest.

As an engraver on metal and a designer of woodcuts Durer ranks even higher, and has certainly been more widely influential than as a painter. His work on copper and on wood is distinguished by the most unerring perception of the capabilities of his material, his metal-plates being executed with extreme finish and refinement, the burin being handled in a manner exceptionally free and painter-like; while his woodcuts are boldly drawn with a broad expressive line, such as could be easily followed by the engraver employed to cut the block. The most celebrated of his copper-plates, which number over 100, are those mentioned above; the Little Passion, on copper (16 plates, 1508-13); St Jerome in his Study (1514); and the Melancolia (1514), and the Knight, Death, and the Devil (1513) -- two great imaginative designs, which are so filled with mysterious and poetic suggestiveness as to be susceptible of the most diverse interpretations. Durer may also be regarded as the inventor of etching, as he produced several plates in which all the lines are bitten with acid, as well as others in which the process is used in preparation for work with the burin. His woodcuts are about 200 in number, including the Greater Passion, 12 subjects; The Little Passion, on wood, 37 subjects; The Apocalypse, 16 subjects; and many single prints of religious, mythological, portrait, and heraldic designs. It has been asserted that Durer executed several plastic works. The finest of these is the Birth of St John the Baptist, a relief on soap-stone in the British Museum; but Thausing regards this and all similar works as spurious. Durer was also author of various scientific writings, of which the Instructions in Measurement (1525), the Treatise on Fortification (1527), and the Treatise on Human Proportion (1528) are most important.

(Alb. Duereri Opera, 1603) and by Lange and Fuhse (1893); an abridged English translation of them was published by Sir W. M. Conway in 1889. Reproductions of his metal engravings were published by Amand-Durand of Paris, and of his woodcuts of his Apocalypse and Life of the Virgin, by Van de Weijer of Utrecht. Thirty-three of the thirty-seven blocks of his Lesser Passion, on wood, are preserved in the British Museum, and stereotype reproductions of these were issued in 1844 and succeeding years.

This article was adapted from an entry on Durer in the Chamber's Cyclopedia, 1900. Some of the locations of Durer's works may have changed since then.